Judges Crack Down on Inappropriate Clothes in Court

If you're headed to traffic court in Bakersfield, Calif., better leave the flip-flops at home. Have a court appearance in district court in Inkster, Mich.? Jeans are on the not-to-wear list. And don't even think of wearing short shorts to court in Dover, Del.

Judges in those jurisdictions and others across the USA are cracking down on skimpy, sloppy or what they consider inappropriate attire in an effort to maintain decorum and beef up security.

A Delaware provision that bars skirts shorter than 4 inches above the knee when standing "sounds like Catholic school," says Timothy Fautsko, who advises courts on security issues for the National Center for State Courts. But, he says, the dress codes serve a purpose.

"I think it maintains order in the courtroom," he says.

"I had a report of one court that had an individual keep coming into court dressed like a clown," he says. "Again, that pushes the dignity of the court."

Courts are a place where serious business is conducted, and that demands appropriate attire, says Delaware Superior Court Judge 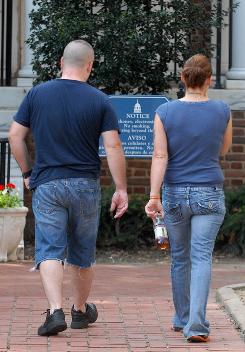 By Bob Herbert, The (Wilmington, Del.) News Journal
Cut-off shorts are prohibited under the new dress code at the Kent County (Del.) Courthouse.

"We're not out to treat people as school kids, but we do expect if you come to court, you need to treat it with the appropriate respect and

dignity it should deserve due to the occasion," he says.

Though some attire may seem obvious choices to ban, other clothing can be a tougher call — and barring some attire can raise troubling questions about race, religion and access to justice, legal experts say.

"It would seem inappropriate to have the security officers be the determiner unless it's a safety issue … especially when the result could be they miss their court appearance and are subject to a penalty. That would be questionable," says Micah J. Yarbrough, a professor at Widener University School of Law.

Many dress codes single out baggy pants, particularly those that expose undergarments. That fashion began in the African-American community, says Holly Alford, an assistant professor in the department of fashion design and merchandising at Virginia Commonwealth University.

Banning such attire is "almost like you're making racial statements without actually saying it," says Alford — who admits she pesters her son daily to pull up his pants.

Fautsko says an increasing numbers of courts are adopting dress codes, and for security reasons some specify that faces be uncovered, posing problems for Muslim women wearing veils or burqas. That issue has come to the fore among judges and security personnel in the past six months, he says, adding that courts are "seeking some definitive direction on what to do, and what to do in a uniform manner, so it's not different from court to court."

Ibrahim Hooper, spokesman for the Council on American-Islamic Relations, says courts can follow the lead of the Transportation Security Administration and have a female officer take a Muslim woman to a private setting where she can remove her face covering.

"There should be no issue for anyone entering a court with either a face veil or a head scarf," Hooper says.

Dress codes can play a role in public safety. For instance, gang-related clothing or gang colors could be used to intimidate witnesses in criminal cases.

Gayle V. Fischer, a professor at Salem State University, has written extensively on the history of clothing and society. In her view, court dress codes are the product of a casual society and ignorance of court culture.

A pajama-clad woman who was turned away from court in Delaware "probably wears that outfit to the grocery store," Fischer says. "Dressing up, that's something that you're taught, and if you don't live or participate in any of the arenas where you need to dress up, you probably just don't think about it."